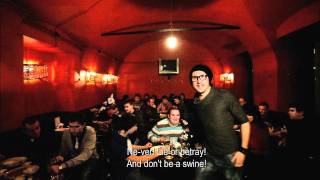 Masha Drokova is a rising star in Russia's popular nationalistic youth movement, Nashi. A smart, ambitious teenager who – literally – embraced Vladimir Putin and his promise of a greater Russia, her dedication as an organizer is rewarded with a university scholarship, an apartment, and a job as a spokesperson. But her bright political future falters when she befriends a group of liberal journalists who are critical of the government, including blogger Oleg Kashin, who calls Nashi a "group of hooligans," and she's forced to confront the group's dirty – even violent – tactics.

Currently you are able to watch "Putin's Kiss" streaming on DOCSVILLE.