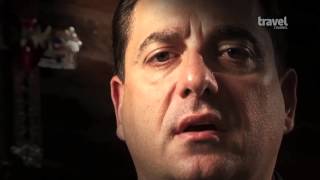 The fifth season opens with an investigation of Iowa's Villisca Axe Murder House - site of a gruesome century-old mass murder whose case still remains unsolved. Other highlights include a Chicago home where a woman has returned to confront childhood nightmares; violent forces terrorizing a family home in St. Clair Shores, MI, that leaves the team questioning the safety of the house; a special "Dead Files Revisited" episode in which a violent exorcism was recorded in a Flint, MI home after the duo uncovered malicious entities; and more.

Currently you are able to watch "The Dead Files - Season 5" streaming on Foxtel Now.

6.8 (2k)
Genres
Mystery & Thriller, Horror, Reality TV, Science-Fiction
Runtime
43min
Season 5
Season 5
Under the new EU law on data protection, we inform you that we save your history of pages you visited on JustWatch. With that data, we may show you trailers on external social media and video platforms.