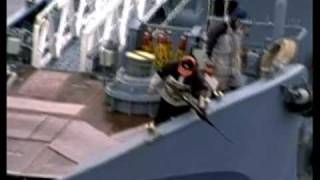 At the Edge of the World chronicles the controversial Sea Shepherd Antarctic Campaign against a Japanese whaling fleet. The international volunteer crew, under-trained and under-equipped, develop a combination of bizarre and brilliant tactics with which to stop the whalers. But first they must find the Japanese ships, a far more difficult challenge than ever imagined - long-time activist Paul Watson and first-time captain Alex Cornelissen employ an array of strategies in the hopes of finding an elusive adversary in the vast expanse of the Ross Sea. With one ship (the Farley Mowat) too slow to chase down the whaling fleet, with their second ship (the Robert Hunter) unsuited for Antarctic ice conditions and with no country supporting their efforts to enforce international law, the situation becomes increasingly desperate. Against all odds, however, a real-life pirate tale unfolds - a modern-day "David vs. Goliath" adventure.

At the Edge of the World - watch online: streaming, buy or rent

We try to add new providers constantly but we couldn't find an offer for "At the Edge of the World" online. Please come back again soon to check if there's something new.

People who liked At the Edge of the World also liked

7.2
Genres
Documentary, Action & Adventure
Runtime
1h 37min
Director
Dan Stone
Under the new EU law on data protection, we inform you that we save your history of pages you visited on JustWatch. With that data, we may show you trailers on external social media and video platforms.