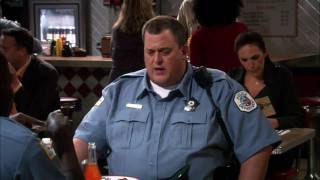 The second season of the television comedy series Mike & Molly began airing on September 26, 2011 on CBS in the United States. The season is produced by Chuck Lorre Productions and Warner Bros. Television, with series creator Mark Roberts serving as executive producer along with Chuck Lorre, James Burrows and Don Foster. The series focuses on the title characters Mike Biggs and Molly Flynn, a couple who meet at an Overeaters Anonymous meeting in Chicago, Illinois. After Molly, a primary-school teacher, invites police officer Mike to give a talk to her class, they begin dating. Molly lives at home with her mother Joyce, and sister Victoria. Joyce is in an on-off relationship with widower Vince Moranto, who is often seen at the house. Mike lives alone in an apartment but is regularly kept company by his best friend and partner in the police force Carl McMillan. Other prominent characters in the series include Carl's grandmother Rosetta; Mike's mother Peggy and cafe worker Samuel. Holly Robinson Peete has a recurring guest role in Season 2 as Carl's love interest. Season two of Mike & Molly broadcasts on Mondays in the United States at 9:30 P.M.