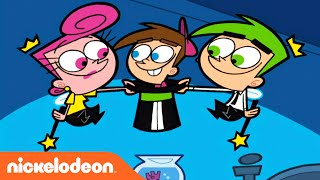 The 5th season of The Fairly OddParents started on July 2, 2004. In this season, the show aired its seventh TV Movie, Fairy Idol, and two Jimmy Timmy Power hour Movies. After The Jerkinators, Both "The Fairly OddParents" and "Jimmy Neutron" seem to end, but later in 2006, both aired episodes that cronically come before the season finale. After November 25, 2006, Jimmy Neutron ended its run, and Fairly OddParents was sent on hiatus for 15 months. This was the first season to be broadcast on Nickelodeon Latin America. Disney Channel along with Jetix hold the rights to broadcast all previous episodes in Latin America, except for The Jimmy Timmy Power Hour special, which does broadcast on Nickelodeon, though with different dubbed voices.

Currently you are able to watch "The Fairly OddParents - Season 5" streaming on Nick+ Amazon Channel or buy it as download on Apple iTunes.