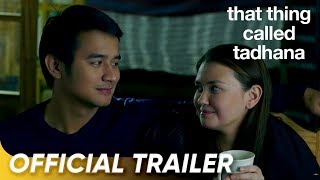 While struggling to meet the strict airline baggage requirements, a woman meets a man who heroically comes to her aid. Both are in despair out of love, which urges them to form a charming friendship which would take them out of the crowded airport and into the secluded city of Sagada where they would attempt to mend each other's hearts and find the answer to the question, "Where do broken hearts go?"

Currently you are able to watch "That Thing Called Tadhana" streaming on Netflix.