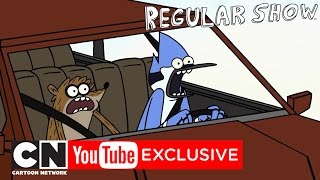 The first season of American animated television series Regular Show originally aired on Cartoon Network in the United States. Many of the characters are loosely based on those developed for Quintel's student films at California Institute of the Arts: The Naive Man From Lolliland and 2 in the AM PM. Quintel pitched Regular Show for Cartoon Network's Cartoonstitute project, in which the network allowed young artists to create pilots with no notes to possibly be optioned as a show. After being green-lit, Quintel recruited several indie comic book artists to compose the staff of the show, as their style matched close to what he desired for the series. Regular Show was picked up by Cartoon Network, who decided to create a twelve-episode first season. The first episode of Regular Show's first season is "The Power", ending with the season finale "Mordecai and the Rigbys". The season was storyboarded and written by J. G. Quintel, Sean Szeles, Shion Takeuchi, Mike Roth, Jake Armstrong, Benton Connor, Kat Morris, Paul Scarlata and Kent Osborne, while being produced by Cartoon Network Studios. The show is rated TV-PG and occasionally TV-PG-V. Despite not airing on Cartoon Network's Adult Swim line-up, it is considered more of a traditional adult's animated comedy than a children's cartoon.

Currently you are able to watch "Regular Show - Season 1" streaming on Sky Go.

8.4 (31k)
Genres
Comedy, Kids & Family, Fantasy, Science-Fiction, Animation, Action & Adventure
Runtime
12min
Season 1
Under the new EU law on data protection, we inform you that we save your history of pages you visited on JustWatch. With that data, we may show you trailers on external social media and video platforms.