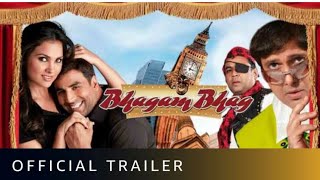 Champak Chaturvedi runs a theatrical troupe in India. He hires two men, Bunty - a graduate in Arts, and Babla- who cannot read nor write English. One has to play the role of the play's hero, while one the villain. Both men end up squabbling with each other, as both want the hero's part. Then Champak finds out that Bunty has molested the play's heroine, Anjali, and punishes him. The group gets a contract to stage 30 plays in Britain, however, on the day of the departure, Anjali opts out, leaving Champak no alternative but to travel without a heroine, but hoping to recruit one while in Britain. Upon arrival, Babla sets about to find a suitable heroine from the Indian population, but Bunty beats him to it and recruits a woman named Munni.

Currently you are able to watch "Bhagam Bhag" streaming on Amazon Prime Video, VI movies and tv or for free with ads on Zee5, Yupp TV, ShemarooMe, MX Player.