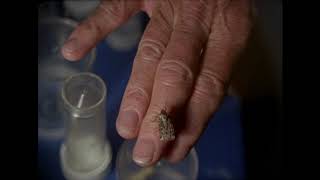 Artist-filmmaker Jessica Sarah Rinland presents Black Pond, a film that explores the activity within a common land in the south of England. Previously occupied by the 17th century agrarian socialists The Diggers, the land is currently inhabited by a Natural History Society whose occupations include bat and moth trapping, mycology, tree measuring and botanical walks. After two years of filming on the land, the footage was shown to the members of the Society. Their memories and responses were recorded and subsequently used as part of the film’s narration. The film does not offer a comprehensive record of the history of humans within the area. Instead, it explores more intimately, human’s relationship with and within land and nature.

Currently you are able to watch "Black Pond" streaming on Mubi.

71%
Genres
Documentary
Runtime
43min
Director
Jessica Sarah Rinland
Under the new EU law on data protection, we inform you that we save your history of pages you visited on JustWatch. With that data, we may show you trailers on external social media and video platforms.