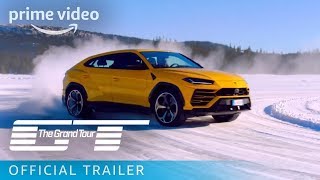 The third series discontinued the involvement of celebrity guests, in order to provide more focus on films, and was the last series to involve studio segments, car reviews and timed laps. In acknowledgement of this drop in the format, the final episode's last scene featured a montage of studio scenes conducted by the presenters over the course of the career - both from this program, as well as from their time hosting Top Gear.

Currently you are able to watch "The Grand Tour - Season 3" streaming on Amazon Prime Video.