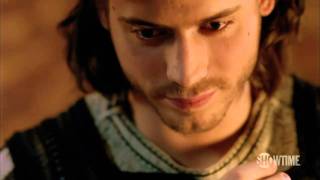 Pope Innocent VIII dies. Rodrigo Borgia wins election as Pope Alexander VI by bribing enough of the cardinals to vote for him in conclave. Alexander "packs" the College of Cardinals with 13 new members, including his son Cesare. He then tries to contract an alliance with the powerful family of Cardinal Ascanio Sforza, one of his two original rivals for the Papacy. That alliance, ever fragile, breaks after Alexander's other rival, Cardinal Giuliano della Rovere (the future Pope Julius II), contracts his own alliance with the King of France for an invasion of Italy.

Currently you are able to watch "The Borgias - Season 1" streaming on Strim, SkyShowtime.