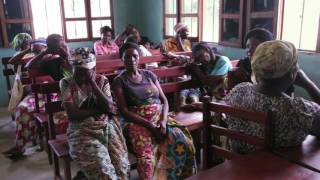 Colonel Honorine Munyole is a robust forty-four-year-old widow and mother of seven young children – four of her own, three adopted. She wields her uniform, beret and black handbag like a protective shield, which her daily work desperately requires. More or less on her own, she runs a small police unit dedicated to protecting women who’ve been raped and children who’ve suffered abuse in the war-plagued regions of the Congo. At the start of Maman Colonelle, she’s transferred from Bukavu to Kisangani, arriving only to discover her future home and office in a desolate state. While she deals with such practical obstacles with suitable feistiness, the traumas and social deformities of the people around her have nightmarish dimensions: the envy surrounding those with state-recognised ‘victim’ status, hope for help from the ‘whites’, depression, helplessness.

Currently you are able to watch "Mama Colonel" streaming on True Story.