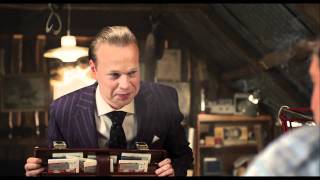 In Knohult things havn't changed much. Eulalia is tired of Nisse who's engaged in all sorts of inventions in his workshop or poaching in the forest rather than to repair the water pump. When Eulalia in protest begins swimming in soft drinks and water the plants with spirit Åsa-Nisse sees nothing else to do but to repair the pump. As with all his inventions he adds a few extra features ... When he starts the machine the ground rumbles and up comes oil instead of water! Now, not only Åsa-Nisse, but the whole Knohult sees their chance to become wealthy! But "Dunderpumpen", as he calles the invention, turns out to be stronger than anyone had imagined, and when shady Scanian oil magnates with support of the Swedish government wants their share of the pie Knohult declares themselves a republic...