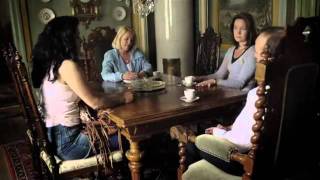 Three women inherit a manor from a lady called Dolores whom none of them knows. The women are complete strangers to each other, so they meet up at the neglected mansion. Unexpectedly, the big house is occupied by a 40 year old man who had lived together with Dolores for almost a decade. Christian says he doesn’t know anything about Dolores’ earlier life, and he does everything within his power to show them that the manor is morally his and that it is all a mistake. The women stay on the estate for three days, and while they are getting acquainted conflicts arise. Also, in search of the reason why they have inherited the house, it slowly dawns on one of the women what lies behind the will of Dolores (from official website).

You are able to buy "The Quiet Game" on SF Anytime as download.