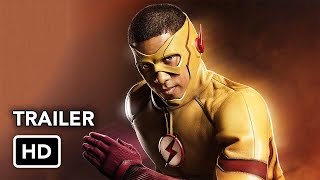 Forensic scientist Barry Allen, aka The Flash, is living his dream life. His parents are alive. He's dating beautiful, smart Iris West. And he's able to stand back and let the new speedster in town, Kid Flash, step in to protect Central City. But the better Barry's life gets, the more dangerous it becomes. His nemesis, Reverse Flash, warns Barry of serious repercussions if he remains in the alternate Flashpoint universe: In addition to memory loss, his powers will fade. When disaster strikes, Barry must decide whether to continue life as Barry Allen or return to his universe as The Flash. As Barry deals with his identity crisis, he and the S.T.A.R. Labs team fight off lethal threats from the God of Speed, Savitar.

Currently you are able to watch "The Flash - Season 3" streaming on Netflix, HBO Go.