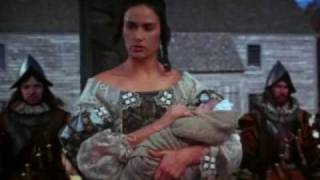 Set in puritanical Boston in the mid 1600s, the story of seamstress Hester Prynne, who is outcast after she becomes pregnant by a respected reverend. She refuses to divulge the name of the father, is "convicted" of adultery and forced to wear a scarlet "A" until an Indian attack unites the Puritans and leads to a reevaluation of their laws and morals.