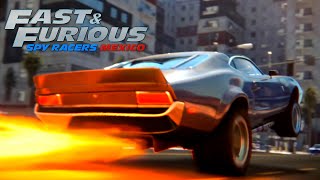 After being framed for a crime that they had no involvement in prior, Ms. Nowhere and Tony's crew flee to Mexico to find the real culprit, clear their names, and flee the unstoppable super-agent hunting them down.

Currently you are able to watch "Fast & Furious Spy Racers - Season 4" streaming on Netflix or buy it as download on Google Play Movies.

TV
Season 4
Under the new EU law on data protection, we inform you that we save your history of pages you visited on JustWatch. With that data, we may show you trailers on external social media and video platforms.