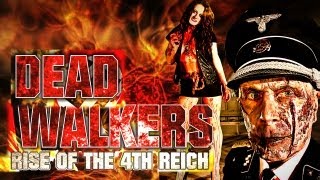 In 1945 the Second World War came to an end and the Nazis fled. Scientists and military elite escaped across borders and found themselves in new worlds. Some fled to Russia, some the United States and others to South America. But there was another division, a forgotten group. A top secret and powerful team of men and women formed in the womb of the Nazi Occult. Now, decades after the war, their work is nearing completion. The 4th Reich is ready. It's more powerful and destructive than ever before. An army of hell is coming. Only one man knows the truth. His mission now, is to convince the world. Based on years of occult research and insider knowledge, Dead Walkers is a film packed with spies, soldiers, Nazis and secrets. But also a very dark and mysterious army raised in the pit of Nazi hell.

Dead Walkers: Rise of the 4th Reich streaming: where to watch online?

Currently you are able to watch "Dead Walkers: Rise of the 4th Reich" streaming on VUDU Free, Tubi TV, Darkmatter TV for free with ads.