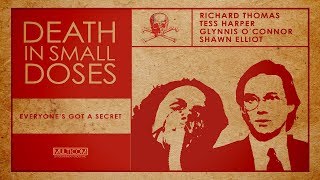 One night Nancy Lyon awakes in pain and dies shortly after - poisoned with arsenic. Her family immediately suspects her husband Richard, who left her temporarily the year before because of an affair. Especially Nancy's brother is keen on getting the children away from the suspected murderer. All evidence points against Richard, but in court Richard surprisingly presents proof that his wife had depressions and maybe killed herself - or are these proofs just fake? -- Depicts an authentic case.

Death in Small Doses streaming: where to watch online?

5.6
Genres
Mystery & Thriller, Crime, Drama
Runtime
1h 28min
Director
Sondra Locke
Under the new EU law on data protection, we inform you that we save your history of pages you visited on JustWatch. With that data, we may show you trailers on external social media and video platforms.