Face of the Screaming Werewolf (1965) 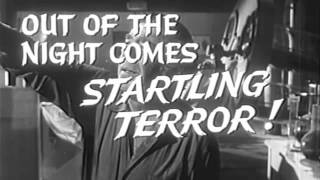 Experimenting in hypnotic regression to past lives, Dr. Edmund Redding of the Cowan Institute in Pasadena has discovered that Ann Taylor is a reincarnated Aztec woman. Via her recovered memories, she is able to lead Redding and his associates to a hidden chamber in the Great Pyramid of Yucatan, where they hope to find the lost treasure of the Aztecs. Instead, they find two mummified bodies - one of a modern man, quite dead, and the other of an ancient Aztec, quite alive. They are able to return safely to Pasadena with both finds, but a rival professor, Janney, kills Redding and steals the body of the modern man-mummy. This he subjects to a resurrection experiment, which works - only the mummy proves to be a werewolf. Two supernatural menaces roam the city that night. This film is composed of footage from two unrelated Mexican horror movies, LA CASA DEL TERROR and LA MOMIA AZTECA, plus new footage shot in the U.S. by Jerry Warren.

Face of the Screaming Werewolf streaming: where to watch online?

People who liked Face of the Screaming Werewolf also liked