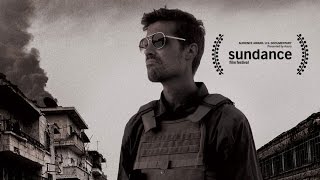 In August, 2014, a video of the public execution of American photojournalist James Foley rippled across the globe. Foley wore an orange jumpsuit as he knelt beside an ISIS militant dressed in black. That image challenged the world to deal with a new face of terror. And it tested one American family. Seen through the lens of filmmaker Brian Oakes, Foley’s close childhood friend, Jim takes us from small-town New England to the adrenaline-fueled front lines of Libya and Syria, where Foley pushed the limits of danger to report on the plight of civilians impacted by war.

Jim: The James Foley Story streaming: where to watch online?

7.7 (1k)
Genres
Documentary, War & Military, Drama
Runtime
1h 51min
Director
Brian Oakes
Under the new EU law on data protection, we inform you that we save your history of pages you visited on JustWatch. With that data, we may show you trailers on external social media and video platforms.