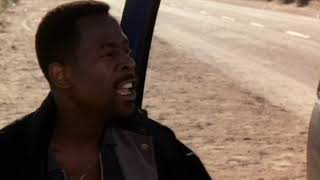 Advertising executive Nick Beame learns that his wife is sleeping with his employer. In a state of despair, he encounters a bumbling thief whose attempted carjacking goes awry when Nick takes him on an involuntary joyride. Soon the betrayed businessman and the incompetent crook strike up a partnership and develop a robbery-revenge scheme. But it turns out that some other criminals in the area don't appreciate the competition.

Nothing to Lose streaming: where to watch online?

People who liked Nothing to Lose also liked

6.7 (44k)
Genres
Comedy, Crime, Action & Adventure
Runtime
1h 37min
Age rating
R
Director
Steve Oedekerk
Under the new EU law on data protection, we inform you that we save your history of pages you visited on JustWatch. With that data, we may show you trailers on external social media and video platforms.