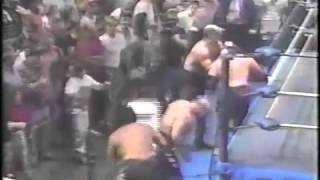 The Great American Bash (1989) was the fifth annual The Great American Bash professional wrestling event produced by WCW under the NWA banner and the second to be produced as a PPV event. It took place on July 23, 1989 at the Baltimore Arena in Baltimore, Maryland. The main event was a standard wrestling match for the NWA World Heavyweight Championship. Ric Flair defended the title against Terry Funk. Featured matches on the undercard were Road Warriors, Midnight Express and Steve Williams versus Fabulous Freebirds and Samoan Swat Teamin a WarGames match, Lex Luger versus Ricky Steamboat for the NWA United States Heavyweight Championship, Sting versus The Great Muta for the NWA World Television Championship, Steiner Brothers versus Varsity Club (Mike Rotunda and Kevin Sullivan) in a Texas Tornado match, Jim Cornette versus Paul E. Dangerously in a Tuxedo match, The Skyscrapers versus Dynamic Dudes and a Two-Ring King of the Hill Battle Royal.

NWA The Great American Bash '89: The Glory Days streaming: where to watch online?

We try to add new providers constantly but we couldn't find an offer for "NWA The Great American Bash '89: The Glory Days" online. Please come back again soon to check if there's something new.