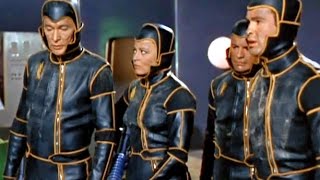 In the near future the two spaceships Argos and Galliot are sent to investigate the mysterious planet Aura. As the Galliot lands on the planet her crew suddenly go berserk and attack each other. The strange event passes, but the crew soon discovers the crashed Argos - and learns that her crew died fighting each other! Investigating further, the explorers come to realize the existence of a race of bodiless aliens that seek to escape from their dying world.

Planet of the Vampires streaming: where to watch online?

People who liked Planet of the Vampires also liked

6.3 (5k)
Genres
Horror, Science-Fiction, Made in Europe, Kids & Family, Action & Adventure
Runtime
1h 28min
Director
Mario Bava
Under the new EU law on data protection, we inform you that we save your history of pages you visited on JustWatch. With that data, we may show you trailers on external social media and video platforms.