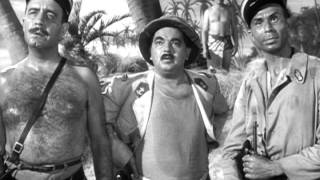 Marine Sergeant James O'Hearn is being tried at the San Diego Marine base for desertion, theft, scandalous conduct and destruction of property in time of war. He refuses to testify or plead guilty or not guilty to the charges. Showgirl Ginger Martin takes the stand against his protest. She testifies O'Hearn won't talk because he is protecting the name of his pal, Marine Private Davey White. Ginger tells how she, broke and stranded, met the two marines in Shanghai two weeks before Pearl Harbor.