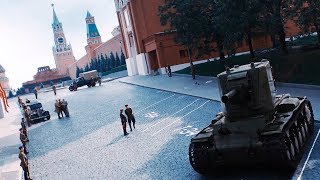 A prototype of a new cutting edge tank is being taken on a secret mission to Moscow, to Comrade Stalin. Soon the cross-country run turns into a ruthless race. Followed by Nazis, the tanks' team defeats their pursuers and proves the great ability and vast superiority of the machine that is about to become a legendary T-34.

Tanks for Stalin streaming: where to watch online?