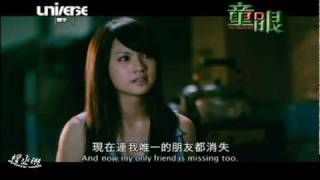 Bangkok, November 2008. Six young holidaymakers from Hong Kong are stranded in Bangkok when the airport is occupied by demonstrators demanding the prime minister's resignation: Rainie and Lok, who are on the verge of breaking up, Ling and her brother Rex, and Ciwi and her boyfriend Hei. Their driver takes them to the old Chung Tai Hotel, run by Chuen, where strange things start happening as soon as they arrive: Rainie sees a female ghost and Ling a disembodied hand. At dinner that night, the three men mysteriously disappear. Under Rainie's leadership, the three girls - helped by the young Man-man and her ghost-seeing dog Little Huang - set out to try and find them in the hotel's underground passages, in between being haunted by the female ghost and a strange monster.

The Child's Eye streaming: where to watch online?