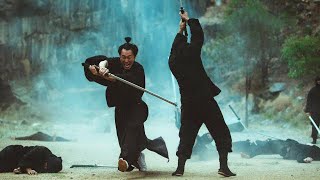 In the early 1990s, a Japanese samurai detective series was aired in Australia and became a cult success. Titled in Japan Ronin Suiri Tentai (meaning roughly Deductive Reasoning Ronin), it was soon known in the West as Top Knot Detective. The original series was legendary in Japan, a cultural train wreck led by Takashi Tawagoto, a crazy writer, producer, director and lead actor; one who could not act, fight or write at all.