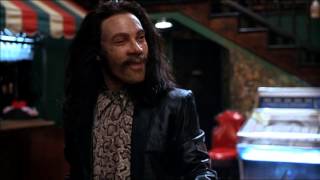 Maximillian, the lone survivor of a race of vampires, comes to Brooklyn in search of a way to live past the next full moon. His ticket to survival is Rita, a NYPD detective who doesn't know she's half vampire -- and Maximillian will do whatever's necessary to put her under his spell.

Vampire in Brooklyn streaming: where to watch online?