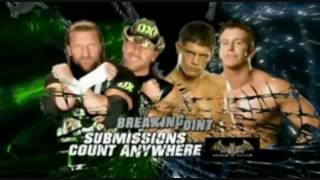 Breaking Point was a PPV presented by Eidos Interactive's Batman: Arkham Asylum. It took place on September 13, 2009 at the Bell Centre in Montreal, Quebec, Canada. The name of the event was voted by fans and was chosen over Submission Sunday, Total Submission, and Submit & Quit. Each main event match was to be contested under submission rules. The main events included CM Punk defending against The Undertaker in a submission match for the World Heavyweight Championship, John Cena challenging Randy Orton in an "I Quit" match for the WWE Championship, and The Legacy versus D-Generation X in a Submissions Count Anywhere match. Other matches featured on the show were Unified WWE Tag Team Champions Chris Jericho and The Big Show versus Montel Vontavious Porter and Mark Henry, Kofi Kingston defending the WWE United States Championship against The Miz, Kane facing The Great Khali in a Singapore Cane match and Christian versus William Regal for the ECW Championship.

We try to add new providers constantly but we couldn't find an offer for "WWE Breaking Point 2009" online. Please come back again soon to check if there's something new.