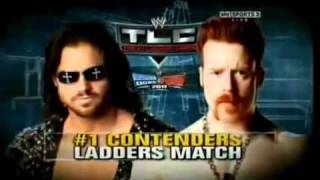 TLC: Tables, Ladders & Chairs (2010) was a PPV that took place on December 19, 2010 at the Toyota Center in Houston, Texas. It was the second annual TLC: Tables, Ladders & Chairs event. The main event was a non-title Chairs match between John Cena and Wade Barrett. Kane defended the World Heavyweight Championship in a Four-Way TLC match against Edge, Alberto Del Rio, and Rey Mysterio while The Miz defended the WWE Championship against Randy Orton in a Tables match. Other matches include a Ladder match between John Morrison and King Sheamus to determine the number 1 contendership for the WWE Championship, a Tag Team Title rematch between Santino Marella with Vladimir Kozlov against Just Gabriel and Heath Slater, and a Triple Threat Ladder match for the Intercontinental Championship between defending champ Dolph Ziggler, Kofi Kingston, and Jack Swagger.

We try to add new providers constantly but we couldn't find an offer for "WWE TLC: Tables Ladders & Chairs 2010" online. Please come back again soon to check if there's something new.