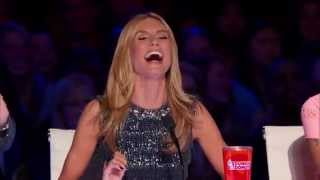 The third season of America's Got Talent, an American television reality show talent competition, premiered on NBC on June 17, 2008. Opera singer Neal E. Boyd was named the winner on October 1, 2008. Preliminary auditions were held in New York, Dallas, Los Angeles, Atlanta, Chicago, and MySpace from January to April. Sharon Osbourne, Piers Morgan and David Hasselhoff returned as judges. Jerry Springer also returned as host. It premiered in the United Kingdom 7 months after the US on ITV2,in Singapore by Channel 5 and debuted in September 2008,and on Hong Kong TVB Pearl on May 23, 2009. This season, the audition stage became different. This season, the X on the stages and matched the ones from Britain's Got Talent or has been borrowed for this season.

Currently you are able to watch "America's Got Talent - Season 3" streaming on Hulu, fuboTV, DIRECTV, Peacock Premium, Spectrum On Demand or for free with ads on Peacock, Peacock Premium.

5.8 (9k)
Genres
Reality TV, Kids & Family, Music & Musical
Runtime
1h 21min
Age rating
TV-PG
Season 3
Season 3
Under the new EU law on data protection, we inform you that we save your history of pages you visited on JustWatch. With that data, we may show you trailers on external social media and video platforms.