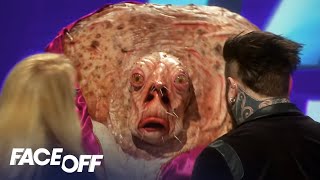 The third season of the Syfy reality television series Face Off premiered on August 21, 2012 and ended October 31, 2012. The season featured twelve prosthetic makeup artists competing against each other to create makeup effects. In the finale, they were voted on by the public in a live broadcast on Halloween. Nicole Chilelli of Sacramento, California, was the winner of the season. The grand prize for the third season was a position as a guest lecturer at the Make Up for Ever Academies in New York and Paris, a 2012 Toyota Prius v, and US$100,000. It was won by Nicole Chilelli, who holds two Face Off records for being the first female to win and the first and only contestant to be eliminated and come back.

8.2 (6k)
Genres
Reality TV, Comedy, History, Drama, Romance
Runtime
43min
Age rating
TV-14
Season 3
Season 3
Under the new EU law on data protection, we inform you that we save your history of pages you visited on JustWatch. With that data, we may show you trailers on external social media and video platforms.