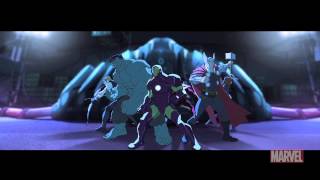 The further adventures of the Marvel Universe's mightiest general membership superhero team. With an all-star roster consisting of Iron Man, Captain America, Thor, Hulk, Hawkeye, Falcon and, occasionally--when she feels like it and only when she feels like it--Black Widow, the Avengers are a team in the truest sense. The Avengers save the world from the biggest threats imaginable--threats no single super hero could withstand.

Currently you are able to watch "Marvel's Avengers Assemble" streaming on Disney Plus or buy it as download on Apple iTunes, Google Play Movies, Vudu, Amazon Video, FandangoNOW.