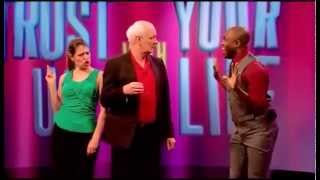 Trust Us with Your Life is an American improvisational comedy television series, based on the BBC Two program Fast and Loose. It premiered on ABC on July 10, 2012. It is hosted by Fred Willard and stars comedians Wayne Brady, Colin Mochrie, and Jonathan Mangum, with rotating performers that include Greg Proops, Craig Cackowski, Brad Sherwood, Nicole Parker, and Josie Lawrence. Each week they act out scenes in the lives of guest celebrities. Serena Williams, Ricky Gervais, Jerry Springer, Florence Henderson, Mark Cuban, Jack and Kelly Osbourne, David Hasselhoff and Jane Seymour have so far appeared. At least eight episodes have been filmed thus far in London, England. The show is currently on hiatus due to ratings competition with larger events, such as the 2012 Olympic Games. Previously, reports claimed that the show was not cancelled. However, 12 months on, no further episodes had been aired.

Trust Us with Your Life - watch online: streaming, buy or rent

You are able to buy "Trust Us with Your Life" on Apple iTunes, Google Play Movies, Vudu, Amazon Video as download.

People who liked Trust Us with Your Life also liked

7.2
Genres
Comedy
Runtime
22min
Age rating
TV-PG
TV
Under the new EU law on data protection, we inform you that we save your history of pages you visited on JustWatch. With that data, we may show you trailers on external social media and video platforms.