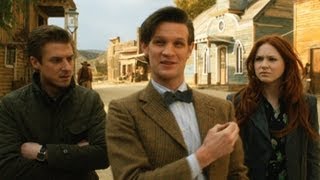 Doctor Who's seventh series was the show's third and final series in which Matt Smith, Karen Gillan and Arthur Darvill played the eleventh incarnation of the Doctor and his companions Amy Pond and Rory Williams respectively. Gillan and Darvill departed the series in the fifth episode, after which a new companion named Clara Oswald joined the Doctor, played by Jenna-Louise Coleman, remaining with the series for its second half. Smith stayed for one year longer than Gillan and Darvill, and will depart the series after the 2013 specials.

We try to add new providers constantly but we couldn't find an offer for "Doctor Who - Season 7" online. Please come back again soon to check if there's something new.