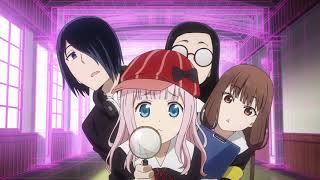 Considered a genius due to having the highest grades in the country, Miyuki Shirogane leads the prestigious Shuchiin Academy's student council as its president, working alongside the beautiful and wealthy vice president Kaguya Shinomiya. The two are often regarded as the perfect couple by students despite them not being in any sort of romantic relationship.

Currently you are able to watch "Kaguya-sama: Love Is War" streaming on Hotstar, Netflix or for free with ads on Viu.