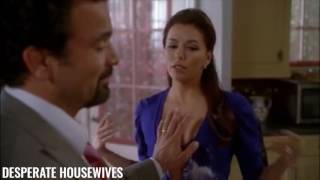 After losing both her husband and her business, Bree slowly begins the process of rebuilding her life, first by telling her friend Gabrielle a secret that could end their friendship, and then by starting up a romance with her much younger contractor Keith Watson. In the meantime, the Solises discover that their daughter Juanita was swapped at birth, and Lynette is visited by her old college roommate Renee Perry (Vanessa Williams), who later moves to the lane permanently. Bob and Lee find their way back to one another, and Susan and Mike's financial situations lead them to move to an apartment in the city and to take on jobs they don't want to endure through, whereas Paul Young, Mary Alice's widower, moves back to Wisteria Lane to wreak havoc.