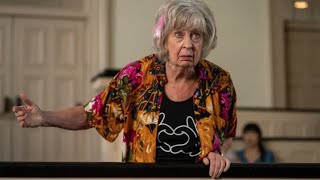 Don't ever tell a 75 year old to go quietly into the night. Hey Lady. - starring Jayne Eastwood - is a 8x5min comedy series about a wiry old gal with a whiskey voice and a bourbon appetite, who refuses to let herself be put out to pasture. In an age when age is often the problem, Lady is a testament to the life force. Episode after episode, Lady finds herself at the centre of some absurd and very public embarrassment, requiring the assistance - and sometimes the bail bond - of one of her tired and over-worked middle-aged children. With the assistance of her friend Rosie (Jackie Richardson), Lady goes on an off-the-charts, rampage of urban vengeance, upturning everything in her path - social norms, rules of etiquette, even the series itself.

Currently you are able to watch "Hey Lady!" streaming on CBC Gem for free with ads.