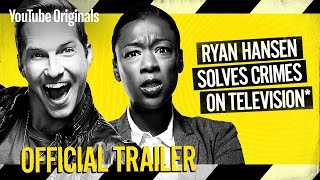 In this series, the LAPD thinks it's a good idea to form a task force partnering actors with homicide detectives. A super meta half hour comedy, the show within a show within a show is as much about Hollywood as it is an action-comedy procedural. Starring Ryan Hansen and Samira Wiley as his strait-laced partner Detective Jessica Mathers, the series features a who's who of stars playing bizarro versions of themselves including Joel McHale, Donald Faison, Eric Christian Olsen, Jon Cryer and Kristen Bell.

We try to add new providers constantly but we couldn't find an offer for "Ryan Hansen Solves Crimes on Television" online. Please come back again soon to check if there's something new.

7.1
Genres
Action & Adventure, Comedy, Crime
Runtime
30min
TV
TV
Under the new EU law on data protection, we inform you that we save your history of pages you visited on JustWatch. With that data, we may show you trailers on external social media and video platforms.