Alkuperäinen nimi: Two and a Half Men 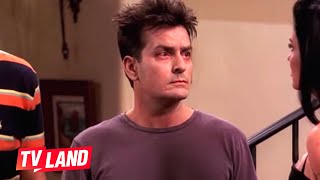 The first season of Two and a Half Men, an American television series created by Chuck Lorre and Lee Aronsohn, that aired its pilot episode on September 22, 2003, at 9:30 p.m., ET/PT, on CBS, a U.S. broadcast television network. The pilot received great reviews and an Artios Award nomination for Best Casting for TV, Comedy Pilot. In the week of October 1, 2003, the series was ranked 7th highest in the top ten shows of the week according to Nielsen Research, with an average 12.1/18 rating. Thanks to this, the series was able to air another 23 episodes, and was renewed for a second season in 2004. The DVD set was released on Region 2 on September 12, 2005, and on Region 1 on September 11, 2007. Its bonus material included: a blooper, outtakes, a backstage tour with Angus T. Jones and a behind-the-scenes special, with the cast and crew of Two and a Half Men.