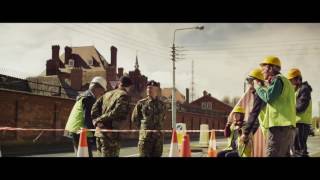 Builder Harry Hambridge is a down-on-his-luck paddy living in London. In one day he loses his job, father and beloved pet hamster, Mouse. On returning home to bury his father, he finds a statement from his Grandfather, claiming that it was he who raised the flag over the GPO during the 1916 Rising, which now hangs upside-down in an army barracks in England. Too long used to the mockery of his life, he sets out with his motley crew to find that “fecking flag” and maybe his passion for life along the way.

You can buy "The Flag" on Apple iTunes, Volta as download or rent it on Volta, Apple iTunes online.