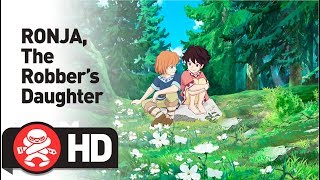 Ronja is the only daughter of Mattis, a bandit leader who lives in a castle in the middle of a large forest. When Ronja grows old enough, she ventures into the forest to interact the strange and magical creatures that live there. She learns to live in the forest through her own strength, with the occasional rescue from her parents. Ronja's life begins to change, however, when she happens upon a boy her own age named Birk.

Currently you are able to watch "Ronja the Robber's Daughter" streaming on Viaplay, SumoTV, Strim.