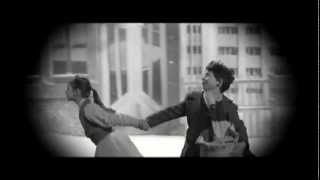 The denizens of a nameless city "in the year XX" have lost their voices. People communicate by mouthing out words that are spelled mid-air. The only person who has kept the use of her voice is La Voz ("the voice"), a singer working for the sole TV channel broadcast in the city, run by Mr. TV, who desires La Voz. La Voz wears a hood over her head that hides away her face. She has a son called Tomás, an eyeless little kid who nonetheless also has a voice (although this is kept a secret). Tomás lives next door to Ana, whom he one day befriends after a letter addressed to his house is erroneously delivered to hers.

You can rent "The Aerial" on Spamflix online.