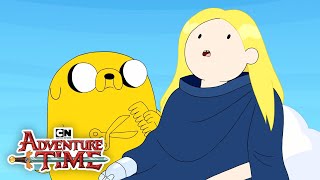 The season was met with largely positive critical reception. In addition, several episodes were nominated for awards; The episodes "Princess Cookie", "The Hard Easy", "Lady & Peebles", and "Goliad" were all nominated for Annie Awards. The episode "Card Wars", however, won a Golden Reel Awards.

8.6 (78k)
Genres
Science-Fiction, Action & Adventure, Comedy, Kids & Family, Fantasy, Animation
Runtime
13min
Season 4
Under the new EU law on data protection, we inform you that we save your history of pages you visited on JustWatch. With that data, we may show you trailers on external social media and video platforms.