Gomorrah is not available for streaming. 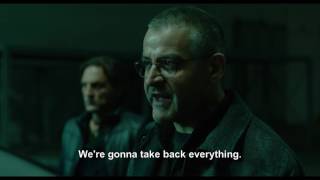 The era of the Savastano clan, who once undisputedly reigned over Naples, seems to be hopelessly over. What lies ahead now is the largest ever power vacuum in the history of the Camorra. The king, Don Pietro Savastano, abdicated, at least momentarily. All the forces involved will suddenly have the chance to have their say and will no longer have to submit to the orders of such a tyrannical boss as Don Pietro. But the latter, although physically and mentally tried by hard prison regime, does not seem willing to lose his empire. Many are now vying for what once was the Savastano kingdom. With Ciro l immortale in the forefront, who from the very beginning will be secretly plotting, testing new and old allies, to finally make the big leap he has always aimed for. A leap which now more than ever seems to be within his reach. Meanwhile Salvatore Conte is now waiting for an answer from the bosses of the clan once close to the Savastano's.

We try to add new providers constantly but we couldn't find an offer for "Gomorrah - Season 2" online. Please come back again soon to check if there's something new.