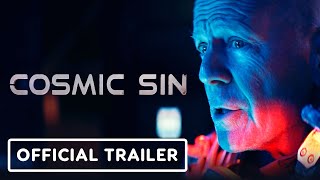 Currently you are able to watch "Cosmic Sin" streaming on Lionsgate Play, VI movies and tv.