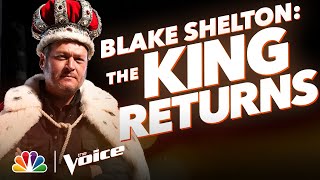 The Voice is an American reality talent show. The series is part of the The Voice franchise and is based on a similar competition format in the Netherlands, The Voice of Holland. The show is hosted by Carson Daly, with Alison Haislip serving as the backstage and social networking correspondent. The winner receives $100,000 and a record deal with Universal Republic Records. Christina Aguilera, Cee Lo Green, Maroon 5 lead vocalist Adam Levine and Blake Shelton are the coaches. Each team of singers are mentored and developed by their coach. In the second stage, coaches have two of their team members battle against each other by singing the same song, with the coach choosing which team member to advance. In the final phase, the remaining contestants compete against each other in live broadcasts. The television audience helps to decide who advances. When one remains for each coach, the four contestants compete against each other in the finale. The American series premiered on April 26, 2011 on the NBC television network. The winner of the first season was Javier Colon, mentored by coach Adam Levine, the finale airing on June 29, 2011. It immediately proved to be a hit for NBC and the network renewed the show for a second season.

We try to add new providers constantly but we couldn't find an offer for "The Voice - Season 1" online. Please come back again soon to check if there's something new.

6.5 (11k)
Genres
Reality TV, Music & Musical
Runtime
49min
Season 1
Season 1
Under the new EU law on data protection, we inform you that we save your history of pages you visited on JustWatch. With that data, we may show you trailers on external social media and video platforms.