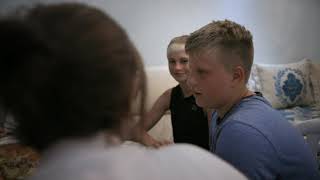 When the junior ice hockey team from the small town of Náchod, in the Czech Republic, sets off in a bus to Morocco to play the away game in an exchange programme, the players and their coach expect an easy victory and a cultural shock: “bring ear plugs”, the coach suggests them with a touch of undisguised condescendence, so as not to hear the call to prayer early in the morning. Both on and off the ice, Rozálie Kohoutová and Tomáš Bojar’s camera focuses on a few teenagers and their exchanges, simultaneously funny and cruel, in a clumsy English.

5.6
Genres
Documentary, Comedy, Sport
Runtime
1h 12min
Age rating
14A
Director
Tomáš Bojar
Under the new EU law on data protection, we inform you that we save your history of pages you visited on JustWatch. With that data, we may show you trailers on external social media and video platforms.