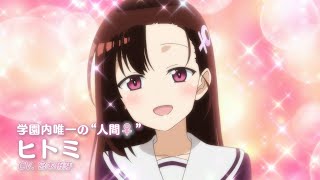 Seton Academy, a school full of animals where, thanks to population decline, there are fewer humans than any other creature. Mazama Jin, an animal hater and the only human male in his class, falls in love with Hino Hitomi, the only female human, the moment he lays eyes her. However he soon finds himself entangled with various other creatures after he reluctantly joins the 'pack' of Lanka the wolf, the only other member of her pack. After getting to know each other, the two decide to create a cooking club, and after a few bad-blooded misunderstandings, Ranka soon joins the club as well. Thus begins the howl-some and howl-arious story of two normal humans; an adorable wolf; a cheerful koala; a sluggish, blonde sloth; and a feline with cattitude in their newfound club—in a story that teaches that friendship can be forged by creatures of different kinds.

Currently you are able to watch "Seton Academy: Join the Pack!" streaming on Crunchyroll for free with ads.

6.7
Genres
Comedy, Drama, Fantasy, Romance, Animation
Runtime
24min
Director
Hiroshi Ikehata
TV
Under the new EU law on data protection, we inform you that we save your history of pages you visited on JustWatch. With that data, we may show you trailers on external social media and video platforms.